Fuller’s Sugarhouse is a family owned and operated, award-winning pure NH maple producer. They are located in Lancaster, New Hampshire, a scenic small town situated among the Northern White Mountains. Sullivan Creative has been working with Fuller’s Sugarhouse since 2014. They have a Country Store in Lancaster where they sell their products, but a good majority of their sales are made off of their website.

Every year, we work with Fuller’s Sugarhouse to develop an integrated marketing campaign to highlight their pure NH maple products and encourage customers from all around the country to purchase quality, locally sourced products. Like most retailers, the holiday season is very important to the Fullers, but they face a challenge because of their remote location and rely heavily on online sales.

Prior to the launch of this year’s holiday marketing campaign, extensive SEO was done to Fuller’s website. We researched key words that people use when searching for maple products and adjusted the copy on the website accordingly. We used Google Analytics and other Google Tools to observe the behaviors of web visitors. This research and back-end work helped to send signals to Google, proving that Fuller’s Sugarhouse was a legitimate maple syrup producer, which increased their quality scores and organic website traffic.

As thorough SEO work was being done, a marketing plan was also being developed. The marketing campaign featured multiple advertising mediums, with each publication being chosen for its audience and ability to laser focus on Fuller’s Sugarhouse products as a gift idea. We implemented the following mediums: 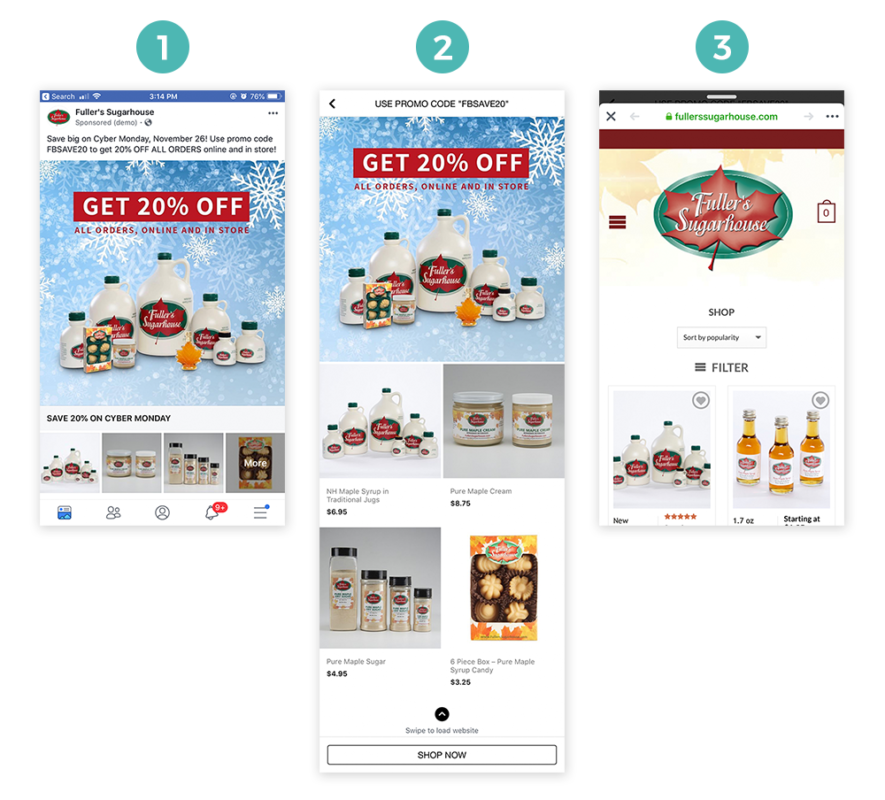 This image shows the process a user would go through after seeing a Fuller’s Sugarhouse ad on their Facebook newsfeed (1), the Instant Experience that would open up (2) and how they would be able to then shop on the Fuller’s website using the promo code.

Each week beginning on November 9th, Fuller’s offered a different sale on their pure maple products. Every sale and advertising medium had a custom promo code and Google tracking URL so we had the ability to monitor the success of each sale and each medium it appeared on. We reported on the results of each sale on a dashboard.

Through the extensive SEO work that was done prior to the big holiday shopping push and the careful selection of advertising mediums for this campaign, organic search became the #1 source referral appearing in their Google Analytics statistics. This means that traffic arriving from an unpaid source (for example, online searches) out-performed any referral sources (such as paid advertising).

Because of the work we completed as part of their Holiday Marketing Campaign, Fuller’s Sugarhouse was 1 of 52 businesses (1 per state) recognized by Google for their economic impact in utilizing web and digital tools to grow their business. This is a huge honor and we are very excited about this accomplishment.

Here’s to more sweet and successful endeavors with Fuller’s Sugarhouse!

See what we’ve been up to lately at Sullivan Creative! The Creative Buzz is where we post news and updates about projects we’ve been working on and fun things that are happening for our clients.